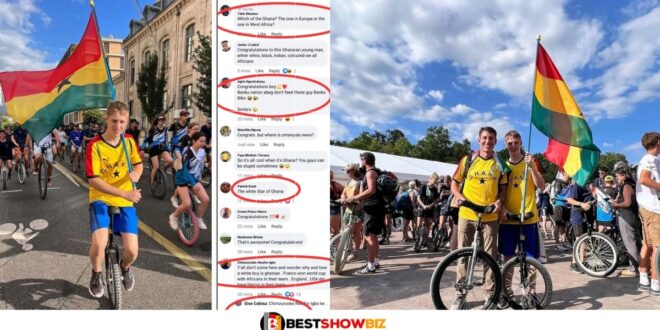 The news broke yesterday that a Ghanaian boy had won two medals at the world unicycling championships.

The win was surprising because Ghana is not known for participating in such competitions, but what was even more surprising was that Roger Haun was white.

Many Ghanaians questioned the news, wondering how Roger could be a Ghanaian. Other information later came to credit his nationality as Ghanaian.

Roger Haun is a 16-year-old boy from Nalerigu. He’s been in that part of the country since his parents brought him there when he was a year old.

Roger honed his unicycling skills over the years and was even given the title Manboora by the King of the Mamprugu Kingdom.

At the world unicycling championships, Roger won silver in the 30-meter wheel walk race and bronze in the 50-meter one-wheel race.

Read Also  Tell your father to d!e if you have issues with my donations - Afia Schwarzenegger (Video)

This news has energized Ghanaians who are experiencing difficulties with their athletes at the Commonwealth Games in Birmingham. Africa, interestingly, is reacting differently to this news.

Ghana’s “rivals” Nigeria has reacted differently to the news that a white Ghanaian has won gold for his country. Nigerians will never forgive Ghana after Thomas Partey and his Ghana Black Stars eliminated the Super Eagles in the last round of the Qatar World Cup qualifier. Since then, the Nigerians have defeated Ghana’s female senior, under-17, and under-20 teams, but this has not satisfied them.

In a Facebook post, Africa Facts Zone congratulated Ghana for winning the medals, but Omo Naija has mixed reactions.

Some believe Ghana is cheating to win medals, while others wonder if Roger even knows what banku is.

Read Also  Twins Ghanaian teachers Patrick and Frederick, put smiles on their student's faces as they give them uniforms

In an era when many blacks are naturalizing to European countries, it is a sight to behold to see a white boy so proud to wave the Ghanaian flag and represent his country.

Take a look at some of the reactions.