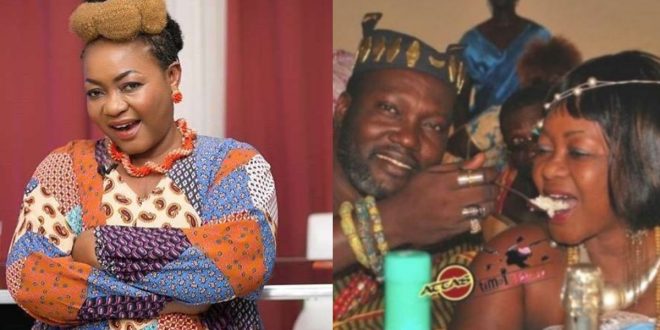 The late Bishop Bernard Nyarki met his death on Saturday, May 2, 2020. The sad news hit Ghanaians and his colleagues in the industry very hard.

His death was a loss of assert for the Kumawood industry as he played every role he was to play so well based on his versatility and he generated mass views in any movies he starred.

Following his death, a lot of controversies rose between the family and his colleagues from some leading to the resignation of Nana Yaa Brefo of Multimedia.

Among these controversies came a rumor that the late actor was in a relationship with his colleague actress Christiana Awuni. prior to his death, this rumor sparked, but the two came out to refute all claims that they are in a relationship.

Interestingly, A picture has popped up that captures bishop Bernard Nyarko and Christiana Awuni dressed as couples to be initiated into marriage in the traditional way.