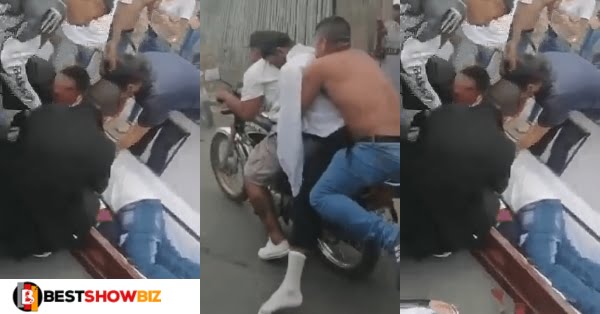 Sad Video: Deadman removed from his coffin and put on to a motorbike for his last ride

After removing their murdered friend’s body from a coffin and placing him on a motorcycle, some young men decided to give him the “last ride to heaven.”

Photos of their strange decision have been shared on the internet and are gaining popularity in some parts of the internet.

Erick Cedeno, 21, was shot and killed by two gunmen last weekend while on his way to a funeral in Portoviejo, Ecuador’s Manabi province.

His friends, on the other hand, obtained permission from his family before putting him on the motorcycle and taking him on his final ride.

In video footage, Cedeno’s body is seen being removed from his wooden casket and carried towards a waiting motorcycle.

He was then seated behind the bike’s rider, with another friend seated behind Cedeno to ensure his body didn’t slide off during the journey.

Please see the images below.