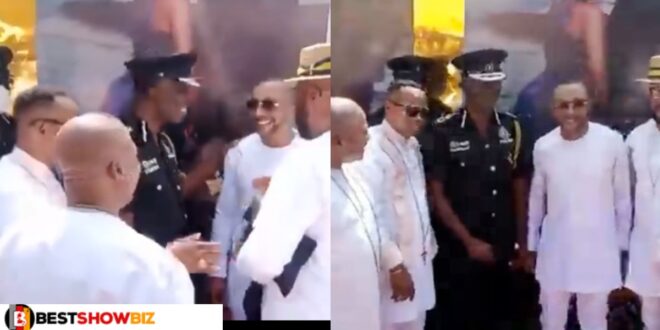 A video has emerged of prominent dignitaries, including the ‘Nation’s Prophet,’ Reverend Owusu Bempah, and the Inspector General of Police (IGP), Geroge Akuffo Dampare, smiling warmly at a wedding ceremony.

We learned that the wedding was for COP Kofi Boakye’s daughter, who married over the weekend.

Dampare can be seen in the video greeting Bempah while flanked by several well-known Ghanaian pastors.

They later posed for a memorable photograph.

The video is relevant in light of Rev Bempah’s recent statements that he respects but does not fear the IGP.

Reverend Owusu Bempah claimed this in a viral video, following the Police Administration’s warning to men of God to stop spreading fear and terror with their uninvited doom forecasts.