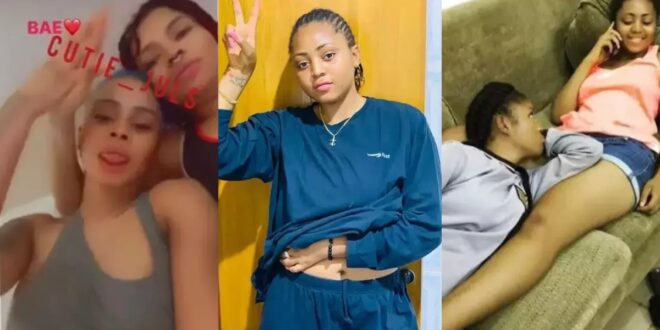 Regina Daniels is suspected of committing lesbianism with her close friend Casie, according to reports on the internet.

Casie, Regina Daniels’ friend, is rumored to be a bisexual who dated Regina for a long time as a lesbian couple.

Cassie announced this a few months ago when she posted a picture of Regina with a rainbow symbol on her page.

Regina Daniels and Cassie Snow were close friends who lived together much like sisters, according to sources, but their friendship ended for unknown reasons.

Cutie Juls, a writer, has collected information that her relationship allegedly caused Regina’s husband, ” Pa Ned,” to cry in his own house.

Mr. Ned Nwoko’s gorgeous damsel Regina Daniel is discovered to be Bisexual, which is a huge setback for him.

Read Also  "I will perform at Michy's wedding"- Shatta wale.

Gina’s sexual orientation isn’t an issue. It’s perfectly natural. It is her decision, but it would be very painful for the old man to spend that much money just to win Regina Daniels’ heart, just to discover she is cheating on him with one small child.

The good news is that Cassie is no longer a part of Regina Daniels’ life.

Casie Snow, Regina Daniels’ supposed ex-girlfriend, has reportedly found love again since their suspected breakup, according to a leak.

Casie, the rumored bisexual, has announced it with a recent Instagram post showing off her new babe, claiming she’s crazy and she (Salwa) is insane.