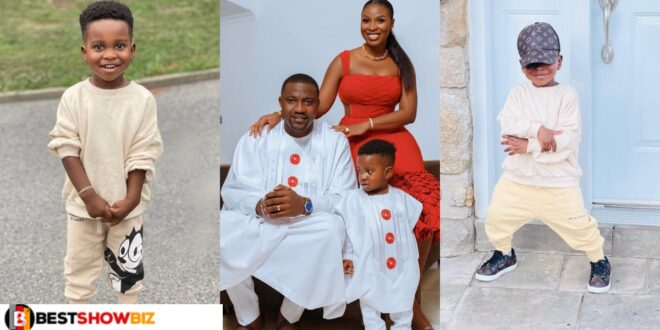 Read everything you need to know about John Dumelo Jnr (photos)

Dumelo Junior is the son of John Dumelo, a Ghanaian actor who later became a politician. On all of his social media accounts, Dumelo Jr. has been spotted gaining more followers.

John, despite his age, is one of Ghana’s most well-known celebrity kids. Here’s all you need to know about John Dunelo Jr.

Gifty Mawunya Nkoormu, a lovely lady who works as a lawyer in the United Kingdom, and John Dumelo, a Ghanaian actor, farmer, politician, philanthropist, and entrepreneur John Dumelo married Gifty Mawunya Nkornu in Accra on May 12, 2018, and the couple welcomed a son six months later.

Junior’s parents take special care of him because he is their only child. Even though he is young, you can see that he has made his parents happy.

Junior has started posting attractive photos on social media. Despite his age, he has amassed a sizable following across all of his social media sites. He models for a few agencies and does exceptionally well.