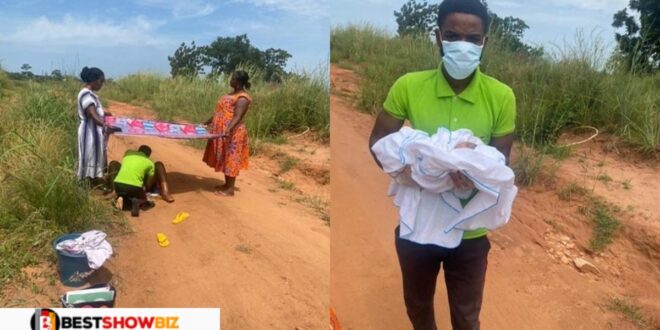 Photos: Male Community Nurse delivers pregnant woman in the middle of the road

In the Kwahu South municipality of the Eastern Region, a male community nurse in the Amartey CHIPS compound delivered a pregnant woman in the middle of the road.

According to viral photographs currently circulating online, the yet-to-be-named nurse assisted the expectant mother in giving birth to a bouncy baby right in the middle of the road.

The road is so poor, according to the information acquired, that only motorbikes plow it on a daily basis.

He was obliged to deliver the extremely pregnant woman in the middle of the road because transporting her would be nearly impossible at the time.

In photos obtained by Bestshowbiz.com, a young male nurse is seen receiving a newborn infant.

Another photo shows the proud nurse holding the infant.

see the photos below;