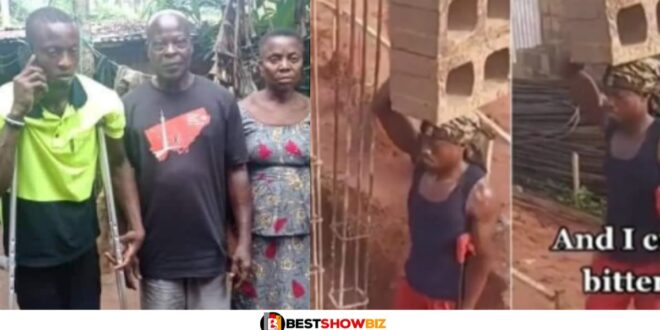 Pastor gives the viral young man with one leg working hard in the slums a scholarship to study Abroad.

In a recent development, good fortune has smiled upon a Nigerian guy who made headlines after being seen in a video working at a construction site while using crutches.

The video went viral after it was shared online.

Apostle Chibuzor Chinyere of Omega Power Ministries, who is famous for his extraordinary acts of compassion and philanthropy, rushed to his aid and prepared to fly him overseas.

Recall that when his video started going viral, the man of God promised to assist him in the same way that he has assisted other Nigerians in recent years,.

The pastor published a statement on Facebook stating that the young man ultimately found himself living in a mud home with his parents and that he relocated them to Port Harcourt.

He revealed that the young man’s leg was severed in an accident that occurred while he was heading to school, and that his parents exhausted all of their financial resources in an attempt to care for him.

Read Also  Emotional Christian Atsu in tears after leaving Newcastle United without kicking a ball for the whole season.

He wrote the following:

”The family lives in a mud house. With the scholarship, Apostle Chibuzor expressed optimism that the young man will bring his family out of poverty. On when the lad will fly out

The young man with one leg that Apostle chibuzor OPM wanted to see, has been seen.

His story is so sad. He lost his leg while going to school.

The father and mother live in this mud house.

After rescuing his life after the accident with there last money.

No more money to go to school.

But Apostle Chibuzor OPM has awarded him overseas scholarship, so he can change the history of his family. And bring his family out of poverty.

By the grace of GOD, Apostle Chibuzor has gotten him his international passport from immigration and his documentation and visa process has started.

And he will be joining the next sets of 46 lucky OPM overseas scholarship students to travel this month of August.

All glory be to GOD ALMIGHTY through JESUS CHRIST his son.

Fully sponsored through tithes and offerings in OPM Church.”