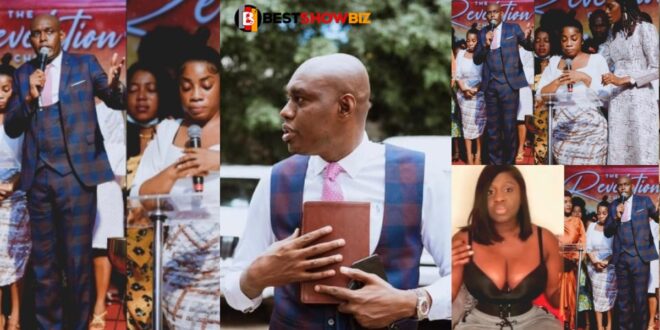 Pastor Gabriel reacts to news that He tricked Moesha to sell her properties for the church.

Pastor Gabriel Ibe, the pastor of the Revelation Church International, who is said to have converted popular socialite Moesha Boduong, has reacted after being attacked by Ayisha Modi.

Ayisha Modi said in a live video on social media that the preacher allegedly ordered Moesha to liquidate all of her assets and contribute the proceeds to the church. She further claims that Mr. Ibe is holding Moesha Buduong against her will for reasons only he knows about.

She sent a harsh warning to the pastor, telling him that unless he did the right thing and released Moesha Bodoung within a 24-hour deadline, she would expose his wrongdoings.

A few hours after Ayisha Modi’s warning, Pastor Ibe decided to post a strange statement on his Instagram page.

He expressed his thankfulness to Jesus Christ for everything He had done for him in the post.

“My KING, My LORD, My SAVIOUR, My ALL, JESUS CHRIST!…I just want to thank you for who you are, what you do and how much of your love that flows through me.”

He also expressed gratitude to Jesus Christ for instilling his DNA in his spirit.

“Deeply grateful that you chose me as one of your dear son’s, thank you Father for the DNA of your Spirit that is in me. I stand as a brand plucked out of the fire, the Lion of the tribe of Judah gave birth to me and GRACE made me before I was born. THANK YOU LORD JESUS!” he concluded.

Pastor Gabriel Ibe appears to be telling Ayisha Modi that nothing she says or does will be able to reach him because he is the Lord’s chosen one.

Pastor Gabriel is the reason of Moesha’s situation and suicide thoughts, according to Ayisha in a live broadcast.

According to Ayisha, the self-proclaimed man of God is hell-bent on ruining the actress, but this will not happen while she is alive.