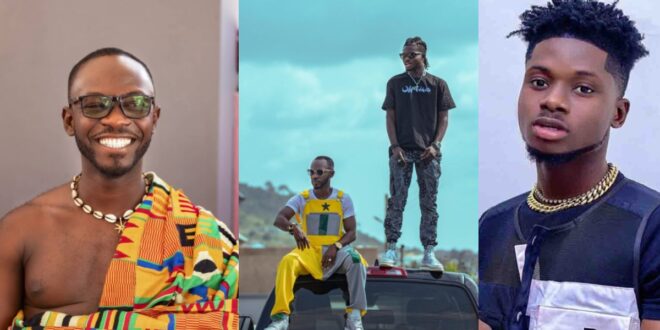 Renowned ‘Rap Dacta’ Okyeame Kwame has disclosed that he is the number one fan of young Ghanaian highlife musician, Kuami Eugene.

speaking in a recent interview with NYDJ, Okyeame Kwame disclosed that he envies the Kuami Eugene.

according to him, though the ‘Angela’ hitmaker is half of his age, he envies the energy Kuami Eugene posses as a young artist.

Okyeame Kwame has managed to have a collaboration with Kuami Eugene with a song dubbed ‘Ye Ko’ which has to gain massive reactions on social media.

In the same interview, ‘Rap Dacta’ touched on reasons why he has not involved in the ‘Kumerican’ movement.

“I am going to properly join the Kumerican movement. We are working on it. There is something coming up. I am going to join it at the business level, at the cultural, and at the unifying front level.