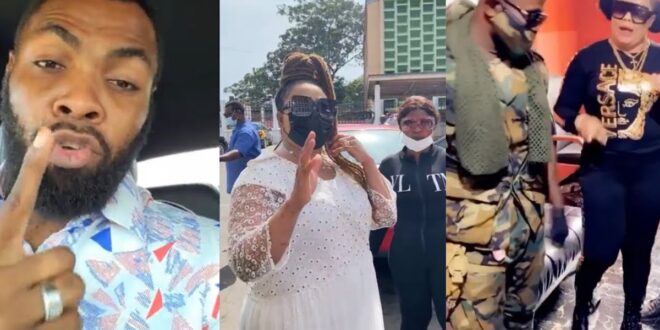 Obofour re-arrest Agradaa after she was granted bail (video)

Rev Kweku Antwi, also identified as Rev Obofour, the founder and leader of Anointed Palace Chapel, has called for Nana Agradaa’s arrest shortly after her bail was granted yesterday.

Nana Agradaa was given self-recognizance bail after paying her license for this year (2021) and a one-year advance after being arrested in the early hours of yesterday, April 21, 2021, for illegally transmitting her television stations.

Obofour, we are informed, has demanded that the famous tv fetish priestess be re-arrested for insulting him on social media.

The news of Obofour and Agradaa’s feud has been all over Ghanaian social media in recent weeks. Day by day, it becomes more fascinating and revealing.

In a series of videos posted on social media, Nana Agradaa aka ‘Abuuuzigi’ abused and made wild allegations against Obofour during their ‘fight.’

Obofour vowed to deal with her (Agradaa) with the last drop of his blood in response to the accusations and insults.

After three years of insults from Komfuo Agradaa, the popular televangelist is living up to his terms, saying in his first-ever reaction video to her that “the battleline is drawn.”