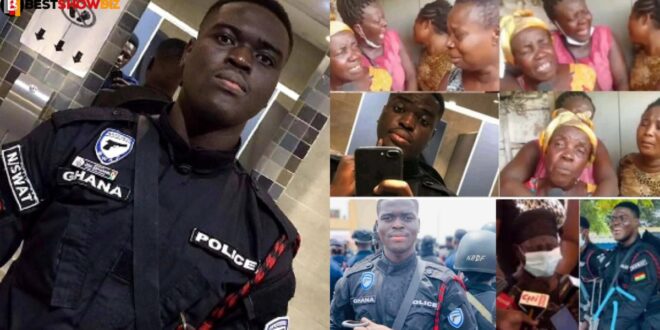 No one has given me GHC10 – Mother of Police Officer k!lled in Bullionvan robbery reveals

Remember the police officer who died with a pregnant lady in Accra’s James Town?

Let me remind you that armed robbers on motorcycles assaulted a Bullion Van on the streets of James Town in Greater Accra, murdering the accompanying police, Constable Emmanuel Osei, and a pregnant woman.

Constable Emmanuel Osei’s mother told Angel TV’s Kofi Adoma that she has had no communication from the government or the police since her son was buried.

According to the mother of the late officer, numerous promises were made to her by the government and the police force at the burial service of the late officer Constable Emmanuel Osei, but only God knows when these promises will be realized. She went on to say that she has not gotten a single dime from anyone, not even Gh10.

“Many people assured me that I would hear from them after my son’s burial, but no one has offered me even Gh10. Emma meant the world to me “This was disclosed by the mother.

When Maxwell Mahama was beaten to death by strangers when we were in Ghana, the government looked after his wife and paid her a large sum of money.

Why can not we do the same for the late officer’s mother? Are their situations distinct from one another?