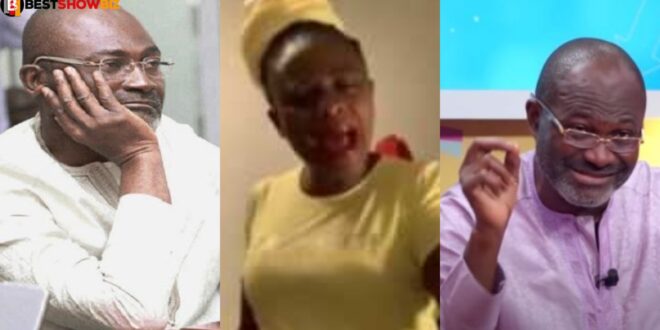 New Video: Sister of Kennedy Aggyapong descends on Multimedia for attacking her Brother

As far as the Ejura incident is concerned, a multimedia group has brought Honourable Kennedy Aggyapong to Parliament for threatening Erastus Donkor.

The Speaker of Parliament also sent Honourable Kennedy Aggyapong’s matter to the Privileges Committee for their consideration.

Due to the ongoing lawsuit, Kennedy Aggyapong’s sister has finally blasted the multimedia organization for assaulting her brother by sending him to Parliament House and subsequently the Privileges Committee.

In the video, Kennedy Aggyapong’s sister is visibly enraged as she makes a series of accusations against members of the Multimedia group, describing them as corrupt.

The woman states that the Multimedia gang should leave his brother alone and should put an end to their evil deeds.

Read Also  "I will be meeting Cecilia Marfo soon, I will arm myself with knives and scissors"- Brother Sammy reveals after he was slapped.

She then challenges them to tell her where they are when Ghanaians become trapped in other countries and want assistance to return home.

We had not heard of a multimedia group in Ghana at the time.

She tells them that they should write tales about how rotten their system is, not letters about his brother.