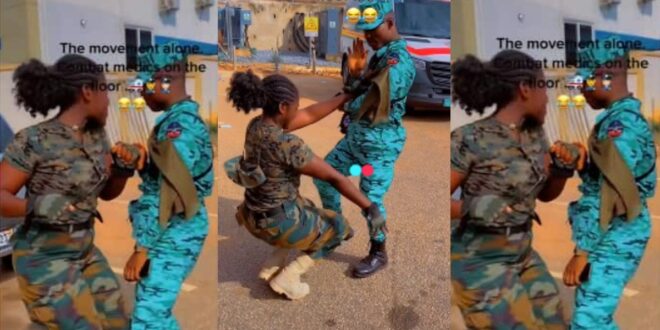 A video of a Ghanaian soldier and an ambulance service member dancing enthusiastically has gone viral, and as a result, many internet users have expressed their appreciation for the pair.

TikTok user @derrickwhyte2 uploaded a video of a young woman in military garb dancing to the tune of Amerado’s “Grace” on the platform. The man in the video was also dressed in a national ambulance service outfit.

The two people in the video appeared to be working at the time, but they stopped for a second to dance to the catchy melody.

The caption for the video read, “the movement alone, combat medic on the floor.”

Some viewers of the video commented on how well the couple was able to sync their moves to the beat of the music, while others speculated over whether or not they were a couple.

Read Also  "You can't make a man change; you can only manage him." – Uncle Ebo Whyte advises women