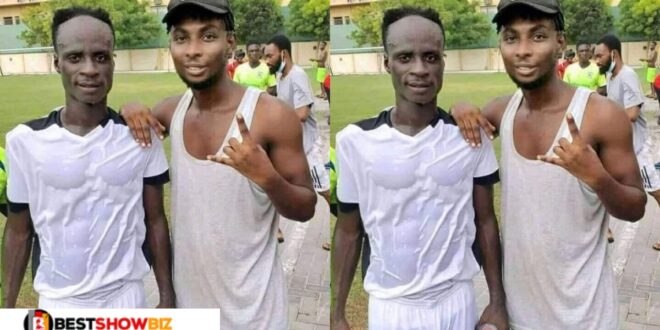 New photos of 23-year-old Ghanaian footballer, Afoakwa possing with a fan he is younger than pops up

When Dickson Afoakwa’s new club Kumasi Ashanti Kotoko unveiled him a week ago, his age became a hot topic on social media.

The club claims that the experienced midfielder is only 23 years old.

Dickson Afoakwa’s announcement stunned many, especially because he appeared to be much older than his age. Many people began to interpret the announcement’s meaning.

During the preseason, the offensive player trained with the Porcupine Warriors under the supervision of Dr. Prosper Narteh Ogum.

The technical handlers were impressed by the former Dinamo Brest player, and he was given a three-year contract to restart his career.

In the two years since his last appearance for Belarusian club Dinamo Brest, when he was loaned out to FC Gomel, Dickson Afoakwa has been without a club.

Some believed the player was older and had possibly reduced his age; others believed Dickson Afokawa was not as clever as he should have been and that his hairline had exposed him, revealing his true age as 50.

Dickson Afokawa is pictured with one of his fans in this new photo that has surfaced on the internet.

Obviously, the photo made Dickson appear older than his fan, but in reality, his fan is younger than he is, as he is only 23 years old.

see his photo below;