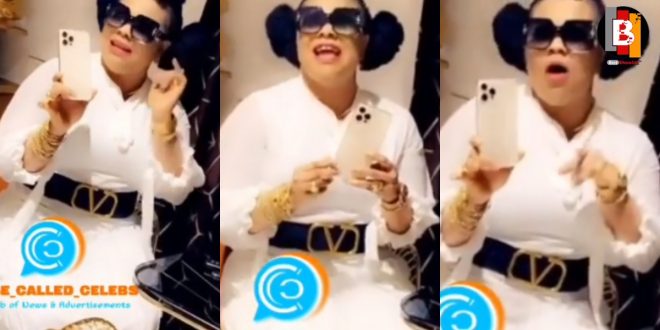 Controversial fetish priestess Nana Agradaa has added apple’s flagship iPhone 12 pro to several other smartphones she owns and has taken to flaunt it.

The Sowutuom-based spiritual woman however got her viewers rolling on the floor with laughter while showing off the phone due to how she struggled to mention the phones name.

Being one of the few to have bought some of the phones in ghana, Nana Agradaa jabbed her critics as she boasted of being rich.

It got to a point she had to mention ‘pro’ and it turned into something else. Instead of ‘pro’, the fetish priestess who is suffering from Rhotacism said ‘PLO’ due to her inability to pronounce ‘r’ sounds.

Social media trolls are however having a field day with her mistake in the video as she’s roasted.