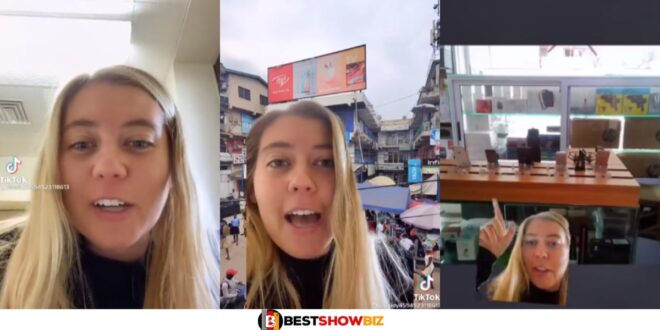 “My phone got lost in Washington, DC, i traced the phone to Accra, Circle” – White Lady cries (video)

An American woman described how she misplaced her phone in Washington, DC, only to discover that it is now in Accra, Ghana.

The woman in a TikTok video stated that she misplaced her iPhone in October and that all of her efforts to locate it were useless.

She tried everything to find it but couldn’t find it, so she forgot about it.

On Monday, December 20, 2021, she got an email informing her that a sound had been played on her iPhone, indicating that the phone had been turned on.

She returned to her friends to monitor the phone, believing it was still in Washington, DC, but to her amazement, it had been tracked to Ghana.

Read Also  "My appetite for sḝx has vanished, I don't feel for it again"- Auntie B

The lady googled the exact address the iPhone was and it took her to Tiptoe lane at Circle in Accra, Ghana.