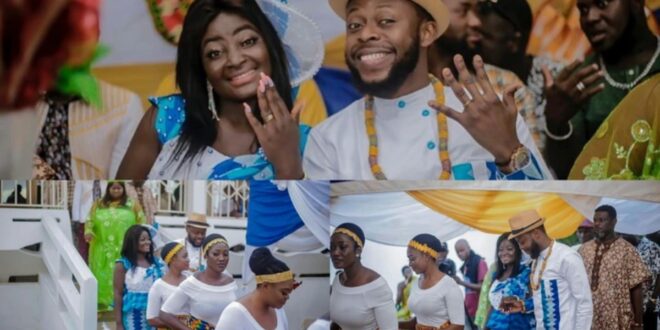 “My marriage to Patricia was fake”- Kalybos

Richard Asante, also known as Kalybos, a Ghanaian comedic comedian, has denied rumors that he is married to an actress named Patricia.

It can be remembered that a few days earlier, a segment of news portals announced Kalybos’ engagement, with some of his colleagues wishing him well.

In a new Instagram update, Kalybos revealed the truth behind the viral wedding photographs and images, confirming his marriage to Patricia.

The pictures were taken on a movie stage, according to Kalybos, who had been quiet on the story until now.

He wrote: “To God Be The Glory…. I Finally Got Married in the movie “THINK SMART”

All those who congratulated me… well Thanks in advance. The Movie premiers on 26th and 27th of October at Watch & Dine Cinema inside Kumasi City Mall, 7 pm and 9 pm at cool 30ghc rate. Come watch the Married Kalybos was it’s plenty Wahala from his wife @patriciaosei1.”

Check out the rest of his article below.