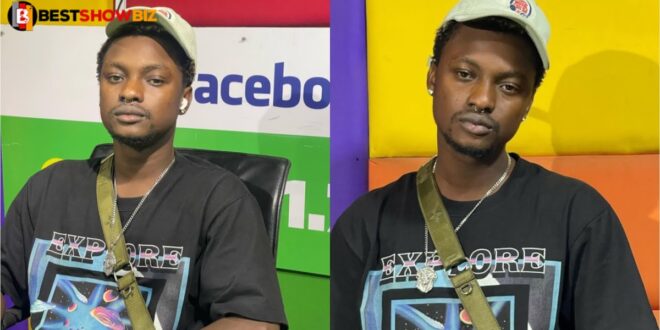 “My landlord is sacking me because i can’t pay my rent, please help me”- Singer Yaw Berks begs Ghanaians on live radio

Perhaps inspired by how swiftly Ghanaians, particularly famous people, came to the aid of veteran actor Psalm Adjeteyfio when he was in need, Yaw Berk is humbly requesting the same gesture in his favor.

The musician, whose real name is Amoah Yaw Randy, stated that his landlord is on his tail because he lacks the means to renew his rent and would appreciate it if they came to his aid before matters worsened.

“Right now, my only issue is with my landlord.” He’s evicting me since I’m unable to extend my rent. I reside in Trasssacco and my rent is due, thus my landlord is always banging on my door, which is concerning. So if I can persuade people to offer to help me, I will be eternally thankful,” he laments.

Berk hasn’t had a steady career since bursting into the scene as a contestant on MTN Hitmaker. After leaving Highly Spiritual Music in 2019, the artist made numerous charges against Kaywa.

He alleged that Kaywa failed to properly manage him, claiming that only two of his songs were released during his two years with the company.

He also alleged that the studios they used for recording were infested with bed bugs. He eventually apologized to the legendary producer for bringing false accusations against him.

Back in January 2021, the musician stated on Daybreak Hitz that it had been difficult to contact Kaywa following the controversy.

Read Also  "i have been in an abusive relationship with Wizkid for years; am tired of him" - baby mama and manager alleges

“In the same way that I spoke negatively about him, I want to use the same medium… I want him to hear it on the radio before we approach him, he said.

However, Kaywa stated on the same show that he had forgiven Yaw Berk but that it will be tough for them to work together again.