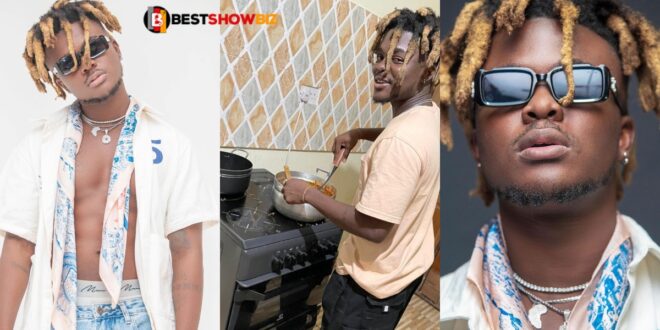 Quamina MP, born Ato Quamina, a Ghanaian artist, has told the story of how his lover shattered his heart owing to his financial circumstances.

In an interview with Asempa FM, Quamina MP stated that it was not the lady’s fault that he was jilted because he was financially unable at the time.

This time, the singer said that he dated the woman for four years and that they used to eat beans and gari soakings, but that she became tired of the lifestyle.

“I had someone way back, we dated for like four years, we used to eat gari and beans and soakings, but e be like the gari choke for her stomach,” Quamina MP said.

“My Ex-girlfriend wanted to come back when I became Quamina MP but the yawa be say, some boy take am.” “The boy then he dey drive corolla, so he came to take my girl wey he say he go marry the girl, he will take her to school and things but e no happen,” he said in pidgin language.

“I don’t blame the girl at all, I just felt she’s my past, so it means if we dey wey yawa happen, she still go lef right, she no go fit,” he added.

He went on to say that his encounter with the lady had inspired him to work hard and bring value to himself in order to avoid a repeat of the situation.

Quamina MP rose to prominence after the release of his popular single “Wiase Y3 D3” in June 2018.