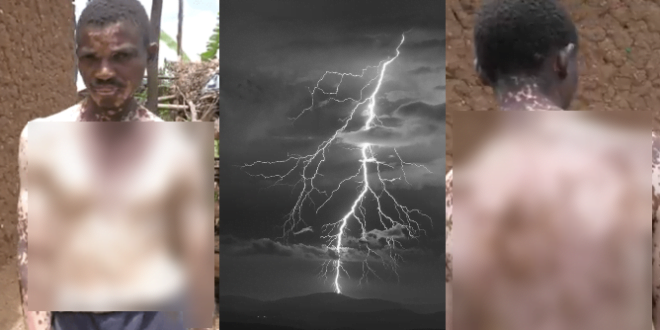 Man Begins to turn white after Thunder struck him (photos+video)

Many people’s lives in this world, especially in Africa, are strange and painful at the same time.

Many people are puzzled as to why Africa continues to be the epicenter of unusual occurrences.

A curious thing occurred to one man when he was hit by a bolt of lightning, and as a result, the worst happened to him.

Let us delve into the background as he tells us about his tragic tale.

Damascene says that he was driving home from fetching water one day when a white cloud appeared over him and a heavy thunder with lightning struck him. His face began to show irregular skin patches and aching almost immediately, and his natural color began to fade.

His wife left him after he explained what had happened to him, claiming that she could not deal with such a human being with a skin disease.

Damascene’s ambition to play football has been dashed due to his present state. I’m turning into a Whiteman, he said, and hence the man who escaped lightning.

On average, the chances of being hit by lightning are 1 in 700,000, which is highly rare. Damascene clarified that it started off as mild burns and aches, but the white colour is now eating away at his normal skin. He claims that he was aware that he should be treated at an early date, but that he lacked the financial means to cover his medical bills. When he is admitted to the hospital, he also has confidence that his illness will be handled.

Day by day, the Damascene skin disease worsens. He experiences intense heat and cold in his body, making it impossible for him to partake in everyday tasks that generate income. He’s in a lot of agony right now.

The disease of Damascene is vitiligo, a skin condition in which the skin lacks its pigment, resulting in spots of irregular white color on the skin.

This is very strange; we have no idea what caused the white thunder to strike him.

Let’s take a look at the video below.