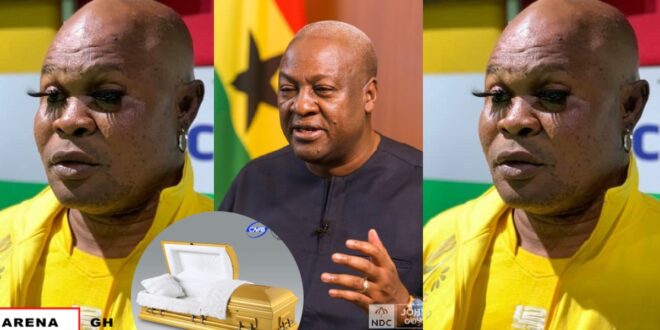 Former President John Mahama has vowed to buy a golden coffin for Bukom Banku’s late mother’s burial, according to Bukom Banku, who is reportedly mourning the death of his beloved mother.

According to Bukom Banku, the NDC’s figurehead, he made this promise after calling him to formally inform him of his mother’s death.

During an interview with SVTV Africa, he also revealed that he would not be spending any money on his mother’s funeral because his godfathers have agreed to cover all financial costs.

According to his own words:

I told Mahama that I want a golden coffin for my mother’s funeral. I will not spend [any money] on this funeral because my fathers are there

The comic boxer also said that he would do everything in his power to ensure that his late mother’s funeral is held in Accra, as we all know he is very famous in the nation’s capital.

Bukom Banku’s mother died on the 20th of May after succumbing to a brief illness.