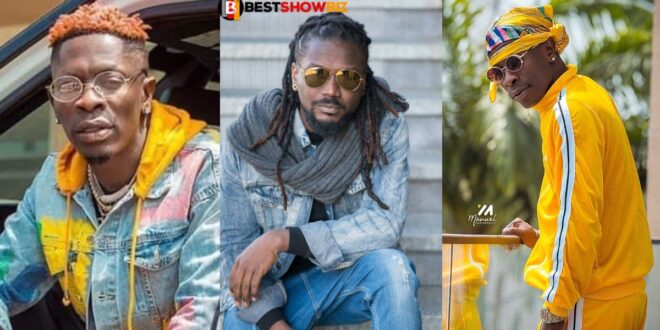 Shatta Wale, according to Samini, is bored because he hasn’t been able to make a hit in a long time.
With a series of tweets, the dancehall act fell on his comrade. Shatta Wale had called out Sadiq Abdulai, and Samini was reacting. He remarked, “Banger drought makes dem start shouting, close yaaa mawutu.”

According to Samini, he took a hiatus to analyze things before releasing a new banger as the banger king.

“Ras took a break to do other things and enjoy listening till it got boring again so guess what, the bangerking just reopened the #bangerfactory,” he said in a Tweet.

In yet another tweet, he slammed Shatta Wale, saying:

“Life! You want to tarnish everyone’s image to elevate yours lol ! tell them about your base awards and all the other fake behind closed doors accolades y’all take just to get closer to authentic legacies. Why didn’t you reject them mr FAKE revolutionary pah pah #bangerdrought”.

“#yearoftruth we go face them squarely. He go come talk say I’m poor meanwhile you no get money. Fanfool and beg beg and kiss ass vibes s)))).. you ever see say I delete tweet or apologize to anyone for lose talk before? Lion status man @shattawalegh stop Dey fool”.

“Come expose #bulldog too ehh @shattawalegh cus base awards matters Dey ..,” he said concerning the Base Awards Scheme that Bulldog used to organize to awards reggae and dancehall.,” he added, referring to Bulldog’s Base Prizes Scheme for reggae and dancehall awards.

Shatta Wale, according to the dancehall act, has been pushing ‘daddy’ titles on wealthy and important men in Ghana in order to defraud them.  “Everyday daddy daddy daddy then you Dey take scam the big men. Dem see you oo @shattawalegh dem just Dey watch,” “he stated