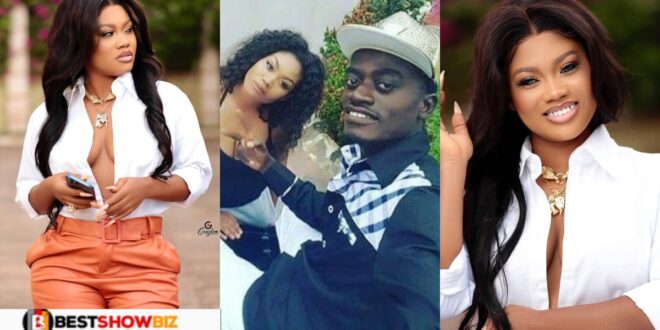 “Lil win is not my level, I have never dated and will never date him”- Sandra Ababio

Sandra Ababio, a Kumawood actress, has debunked reports that she dated Lilwin and that the comic actor dumped her after meeting his present wife.In an interview with Abena Ghana on the “Journey Show,” the lovely actress claimed unequivocally that she has never been in a romantic relationship with Lilwin and that it will never happen.

She went on to say that Lilwin only liked her as a sister and that there were no strings linked to it.

Sandra Ababio, when asked about Lilwin’s purported love proposal to her, said that Lilwin could never propose to her since they are not on the same level. She added that they are two different persons with distinct goals.

After words got out that she was in bed with Lilwin, the movie star said she was constantly tormented on set by some actors and actresses.
She said that she was subjected to a barrage of abuse since it was expected that Lilwin would advocate for her to be cast in more prominent roles in films.

Sandra also took advantage of the chance to advise any guys who are interested in her to stay away from her DMs because she has a partner whom she adores.

Despite the fact that both Lilwin and Sandra Ababio have refuted the numerous rumors that they are dating, social media users have refused to believe it.