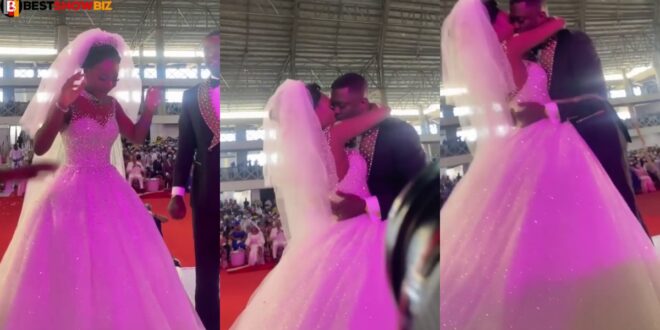 Naa Dromo Ankrah, the daughter of Rev. Sam Korankye Ankrah, put on her own melodrama during her white wedding in her father’s Royalhouse International Chapel.

Naa erupted into a brief period of passionate prayer moments after the officiating clergyman said the ever famous “you may kiss the bride” remark, before she grabbed her husband around the neck and locked lips with him.

The video has sparked widespread discussion online, with people from different walks of life putting their own spin on it.

On Wednesday, July 7, 2021, Naa Dromo married her longtime heartthrob in a traditional ceremony.

The climax of the ceremony was when Rev. Konrankye Ankrah, clad entirely in white, took the microphone and asked Naa if he should take the dowry items Nana and his family had brought.