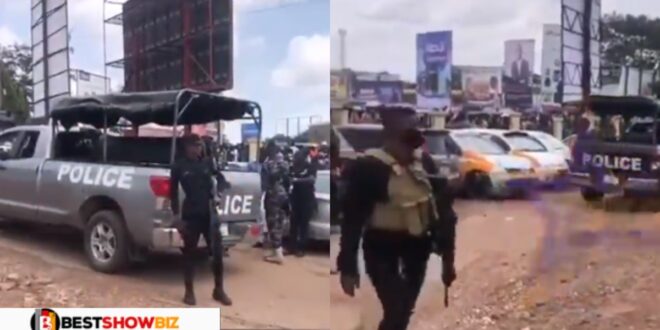 Kumasi: Soldiers storm the Suame Police Station, beating policemen after one soldier was arrested by the police. [Video]

A video posted on social media shows a group of Ghana Armed Forces personnel storming the Suame Police Station and beating up police officers for arresting one of their own.

According to the report, the enraged soldiers attacked the police station in response to the assault on their men by police officers at the Suame roundabout checkpoint.

The police officers at the checkpoint arrested a man on a motorcycle and slapped him while arguing.

Unfortunately to him, the man was a military commander who called his colleagues and told them what the police had done to him.

As expected, the troops arrived in force, stormed the police station, knocked up every officer present, and then released their colleague.

The police were forced to ask for reinforcements, but by the time they arrived, the military men had already left.