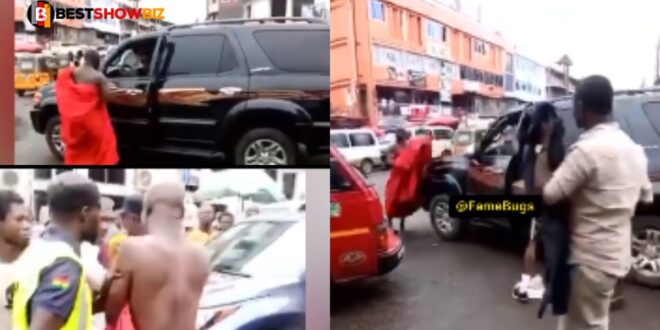 A guy who has yet to be identified took his rage and jealousy to the streets, confronting his wife’s supposed boyfriend.

Residents in Adum, Kumasi, gathered to try to calm the man down after witnessing the unusual occurrence.

The alleged husband, who was dressed in a red robe as if he were ready for battle, confronted his adversary, who was driving an SUV.

It didn’t take long for punches to fly, causing the claimed opponent to exit his vehicle for safety reasons.

The elderly guy can be heard accusing the gentleman of having sexual intercourse with his wife, saying that he will deal with him fairly.

The elderly man pulled out a cutlass in a rush, but he was soon halted by several nearby city guards.

Police arrived to apprehend him for brandishing the cutlass. Later, he was placed in handcuffs.