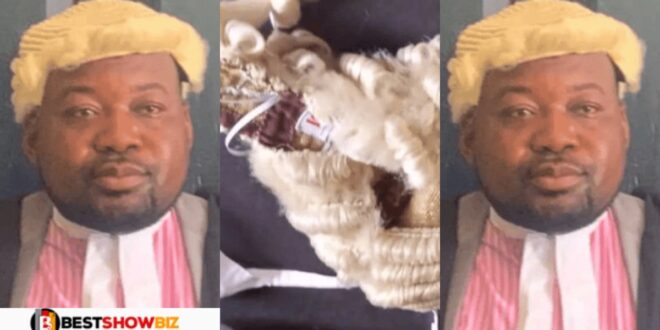 Kyei Baffour, a fake lawyer, was arrested today after posing as one in order to make some money from the profession.

According to sources, Kyei Baffour, who has been impersonating as a lawyer for years, ran out of luck when the presiding judge of the cases he was meant to work on at the Nyinahin District Magistrate court, Madam Vera Victoria Akonu, started an investigation on him.

The presiding court was stated to be skeptical of the lawyer who claimed to have been called to the Bar in 2015 with the license number EAR 21053/21, all of which were later proven false by the Ghana Bar Association and the General Legal Counsel.

Read Also  10 years old boy gets a BMW car as his birthday gift from his mother.

The lawyer was arrested by Magistrate Vera Victoria Akonu, who eventually confessed to being a false lawyer despite having passed the Law Entrance Examination in Ghana but choosing to discontinue the study for personal reasons.

Kyei Baffour has now been detained and is being held in police custody while his case is being processed before a Circuit Court in Nkawie.