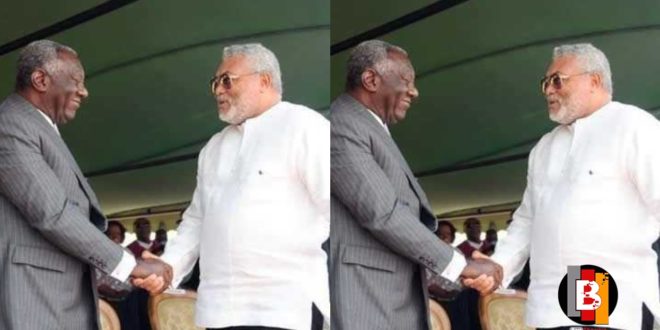 Kufour salutes J.J Rawlings as he mourns his death in a touching Statement

Ever since president Rawlings passed, there have been reactions from both local and international diplomats over his death. The latest to make addition is former President John Agyekum Kufour.

In a press statement that was signed on Friday, November 13, Kufuor admitted that although he and the late President did not agree on many state matters, he felt J.J “was trying to do the best he knew and could, under his peculiar circumstances.”

He also revealed that he and his wife, Theresa are “deeply saddened by the passing of former President Jerry John Rawlings, whose untimely death reported yesterday came as a thunderbolt to us and our children.”

He went ahead to note that JJ Rawlings ruled the country for a long time but “when the time came for him to step down on 7 January 2001, he obliged and contain whatever reservations about me and my government…”

To Kufuor, history would give the NDC founder and the longest-serving head of state a “balanced place in the annals of our nation”.

He added; “We’re left now to mourn him and also express our heartfelt condolences to his widow Mrs Nana Konadu Agemang-Rawlings, their children, and the larger family.”

Former President/ex-military officer, Jerry John Rawlings,73, died on Thursday, November 12 at the Korle Bu Teaching Hospital in Accra after being under intensive care for two weeks for contracting COVID–19.