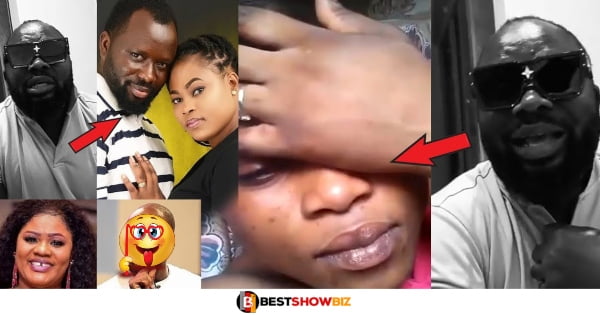 Joyce Blessing’s husband, Dave Joy, has stated again that the embarrassing video showing the gospel singer inebriated had nothing to do with him.

The gospel singer, on Wednesday, was seen drinking a bottle of red wine in a disturbing video while professing her love for an unnamed man who had broken her heart.

Her team later posted a statement claiming she made the video for her husband.

On the other hand, Dave exposed his wife in his reaction, insisting that the video was intended for another man with whom she was allegedly having an affair.

He revealed, among other things, that he had been unable to contact Joyce Blessing because she had blocked him.

You may listen to the interview in the video below.

Hundreds of Ghanaians reacted angrily to Dave’s initial reaction to the video and comments, believing he should have remained silent to protect his wife.

He refuted Joyce’s management team’s claims that the film was “an old video of a loving woman expressing private thoughts to her husband, and the contents were intended to be disseminated publicly.”

In a video message, Dave Joy revealed that his real name is Kwabena Adu Gyamfi and that the intoxicated video Joyce shot was for someone named Kwame.

In response to the recent video, he stated that he had given Joyce’s management statement to his lawyers and that their divorce case would be taken to court.