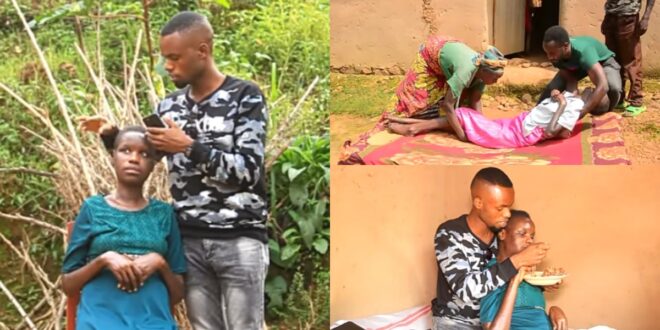 “I will never give up on my girlfriend despite her condition”- Man says as he flaunts his girl.

Dativa, a 22-year-old Rwandan woman, was infected with a strange infection that is extremely unusual.

In an interview with Dativa’s mother, Belissa, she revealed that she started to feel pain in her knees in her early years of high school (at the age of 15), but she dismissed it as a natural ache that would pass in no time.

The discomfort continued, and with time, her skin formed fractures, some of which started to break off like a tree.

With the exception of her boyfriend, who was with her during her pain, she lost all of her peers as a result of this.

Her condition is so bad that she was unable to move again, forcing her to drop out of school. But, as previously reported, her partner continued to visit her to provide words of support and to monitor her condition.

Since her mother was a single mom, they had to get care in their small village because they could not afford it in the capital, but after visiting several health centres, they could not find out what was wrong with Dativa.

This went on for a while until Dativa’s mother received a call from someone in a similar condition, leading them to a health facility where Dativa could be taken care of.

Dativa was finally admitted to the hospital, where she was supposed to survive, after collecting some money from society donations.

Her partner claims that she is the one with whom he wants to share the remainder of his life with, and that he would never give up on her.