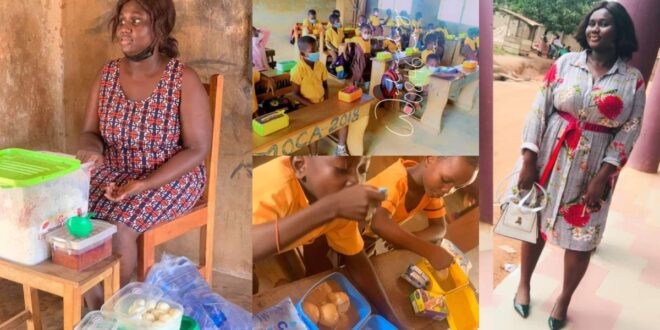 Abenah Serwaah Mankosa has made headlines across Ghana for using her meager income to feed her students at Aninkrom D/A Primary 1 in Adankwame District, Ashanti Region.

After she went viral for her good deeds, the Ghana Education Service pursued her and sanctioned her for violating the institute’s rules.

Abenah Serwaa described how she was manhandled and treated with contempt by the authorities in the office in an interview on Angel TV this morning, March 15th, 2021.
” I was scared and had no one to defend me. When I spoke I was told my English was bad and I even felt they should have sacked me rather than put me this such a horrible scrutiny. My headmaster was asked to take my phone and turn it off so that I wouldn’t be able to record what they said.”

Read Also  Meet the richest pastor in the world, who has 4 private jets and numerous cars

“The District Education Officer spoke badly to me and almost beat me up because of how aggressive they became when I was fumbling to answer some of the questions they asked me. I was given a document that I wasn’t privy to in my three years of teaching as the code of Ethics of GES.” She narrated.

She went on saying: ” They treated me as if I was a common criminal and they threatened to arrest me if I was ever seen giving anything to any child. They also told me they were going to take me to a remote area where I wouldn’t be able to feed nor take care of any child again. My education director was not supportive and he alllowed them to mistreat me and disrespect me”.

Serwaa responded, “I won’t stop cooking for kids, but I want to be transferred from the district I’m in because I wasn’t treated well,” when asked if she would ever stop doing what she was doing for the kids. My headmaster even complimented me on how happy my children were. Because I exposed their evil deeds, the GES had a problem with me. The school feeding program is no longer operational, and they are dissatisfied that my actions have exposed the fact that they do not feed the children as they claim.”

Meanwhile, the Ghana Education Service has yet to respond to Abenah Serwaa Mankosa’s allegations.