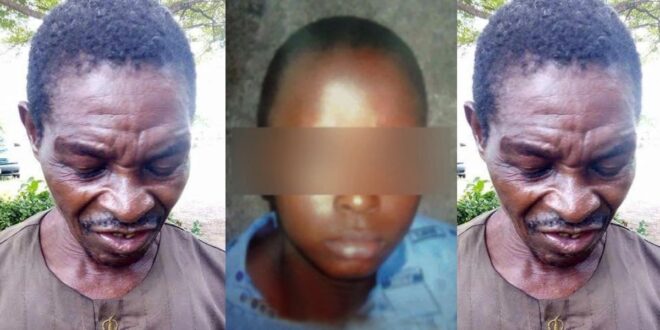 “I took her to an unfinished building and slept with her.” Man who slept with 11-year-old neighbor’s daughter confesses.

Men of the Katsina State Police Command have been active in apprehending an old man who forcedfully slept with a neighbor’s daughter after luring her to an unfinished house, according to news published this afternoon.

The old man, whose name was given as Danladi Habibu, allegedly lured his neighbor’s 11-year-old daughter to an unfinished building not far from their home and forcibly slept with her there until the secret was revealed, as the teen allegedly told her father all that happened between her and the old man.

However, after this occurred, the victim’s parent, Mamman Musa, went to Katsina’s Central Police Station and filed a complaint against his neighbor, who was later arrested by police operatives and paraded alongside other offenders today.

The perpetrator will be charged in court as soon as police operatives complete their investigation, according to the command’s spokesperson.