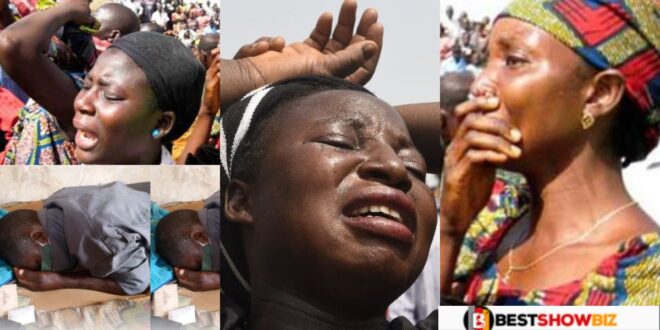 “I told my son to stop that job”- Mother cries as Armed robbers shỡt and k!ll his son was a security guard

The mother of a 37-year-old security guard killed by armed robbers has revealed that she has always advised her son to leave his profession as a bank security guard.

The reason, according to the  70-year-old emotional mother, is the perilous nature of the work that comes with it.

On Wednesday evening, armed robbers stormed the Atonsu branch of the Adansi Rural Bank in the Ashanti region, killing the 37-year-old security guard.

The Security was killed by criminals after they failed in their effort to break into the bank’s ATM machine.

The robbers were successful in breaking into the bank’s banking hall, where the security officer was killed.

The robbers only seized a flat screen TV and a laptop computer, according to bank employees who confirmed that no cash was taken by the robbers.