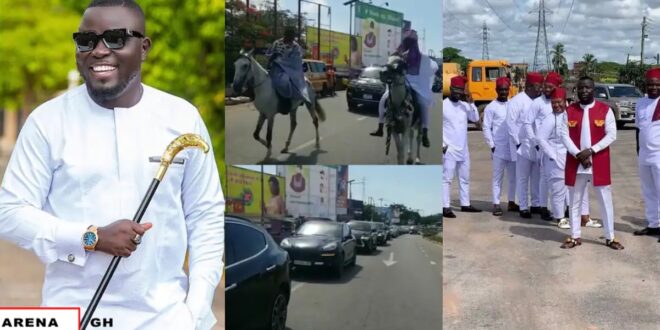 The wedding, which took place in Cape Coast, the capital of the Central Regional State, was a huge deal.

Many Ghanaian celebrities were in the city to cheer their friend on his special day, as Arenagh.com previously noted.

With the exception of taking a slew of celebrities to town, Dr. Pounds’ wedding caravan effectively shut down Cape Coast.

Dr. Pounds was seen sitting in a caravan of over 20 vehicles as he and his colleagues arrived at the wedding venue, according to a video obtained by Arenagh.com.

The convoy included a number of high-end vehicles, including a Porsche Cayenne and a Toyota Land Cruiser, among others.

Surprisingly, the caravan of luxury cars was led by horses with smocked riders.

The dramatic scene triggered a minor traffic jam, as many people flocked to the streets to see the convoy.