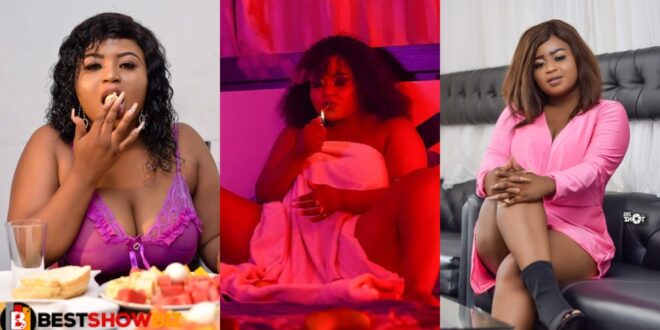 Badgirl Nafisah, a budding female musician, has shyly revealed that she erroneously believed she could include sex into her brand in order to obtain public appeal, but she was completely wrong.

Badgirl Nafisah remarked in an interview with Graphic Showbiz:

“Just like others, when I was entering the music scene, I also thought using nudity will be my escape route to the top, that it will make things easy for me but little did I know that it was going to be much tougher.”

She further added: “For example, when you look at my videos, they have a lot of sexually explicit scenes so it is difficult to get them played on television stations. And radio stations also don’t want to play because of the lyrics of the songs. These platforms also help in promoting my works but they won’t because of the explicit content and videos.

“One of the things that nudity does is that, you become known on social media but not on mainstream platforms but the dream is to be known in the mainstream but because I have sold myself in that manner, it hinders me from getting higher. It is not easy at all.

“There are times I go out and I hear people sing my songs yet they do not know me and I sometimes go like, ‘I am the one who sang the song you are singing.’ On Tik Tok for instance, some of the words in my songs are used by people for their videos but they do not know who sang it. You can’t blame them, I am sure if I was on both social media and mainstream, I will be more popular than this.”

Another concern Badgirl Nafisah touched on was her manager’s lack of financial muscle. “I have a manager but he is not financially fit so we are not able to take my craft to the level that we want and I am also not there yet financially so it’s a bit of a struggle but I hope we will get there.”