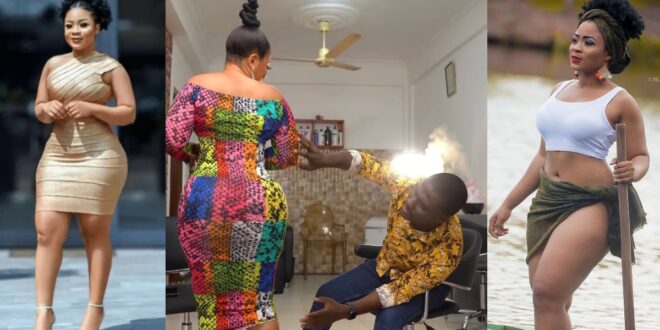 Kisa Gbekle, a well-endowed Ghanaian actress and film producer, has revealed that she spent more than Gh60,000 on a physical augmentation treatment in Turkey.

The actress went on to say that the above-mentioned sum of money comprised her business flight tickets, hotel, food, and other expenses in Turkey.

In an interview with Zionfelix, the actress recalled how she had previously actively pushed against physical augmentation operations.

“I know you’re going to slam me since I came out against it multiple times on your show.”

Kisa revealed that she had the procedure since she had a really large stomach during the 2020 lockdown.

“I was having a great time when Covid arrived. I didn’t train since all the gyms were closed; you know how much I trained. I was just eating and sleeping at home. After a while, I began to gain weight, and I had to decide if I would be able to burn off this fat and return to my former self, or whether I should just go get it done.

“Despite the fact that I came out strongly against it, I always claimed that life is only one, and this is just me.” “I had to do this because I needed to appear well for the business that I work for, so I chose it,” Kisa stated.

However, the interview’s host, Zionfelix, challenged her statement that she went for the operation since she had given birth, to which the actress replied, on the contrary.”

“Who said I was a mother? Not yet, but even if I do, it will be extremely excellent news,” she continued.