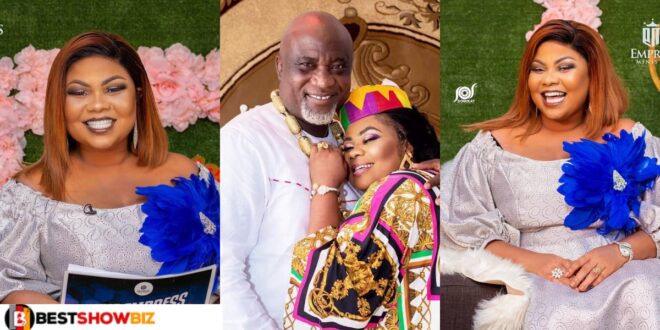 While on Joy FM on Saturday afternoon for the launch of her track named ‘Eyewoaa,’ gospel musician Empress Gifty Adorye used the opportunity to deliver a heartfelt birthday message to her husband, who celebrates 52 today, November 20.

Hopeson Adorye, an NPP pillar, received a surprise call from George Quaye, the host of Showbiz A-Z, and while they were speaking, he asked Empress Gifty to tell her husband something on his birthday.

When Empress Gifty was given the opportunity, the first words she said were. ‘Ayigbe, I love you so much,’ the host of the show and the other individuals in the studio said excitedly.

When questioned why she called her spouse ‘Ayigbe,’ Empress Gifty responded that it is a pet name she has given him.

In response, Mr. Adorye said that he calls his wife ‘Mamaga,’ and that he loves her.