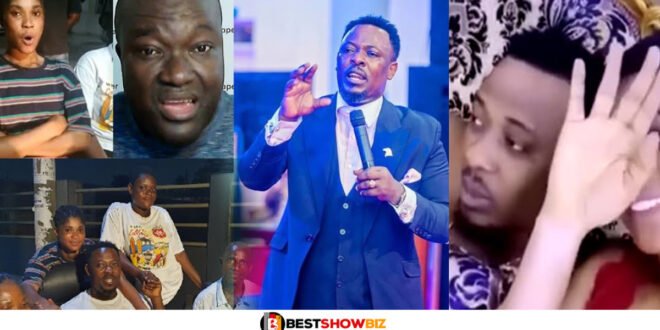 Prophet Nigel Gaisie, the founder and head of Prophetic Hill Chapel, has been in the news recently after a viral video showing himself and another girl, whom many allege is his side chic, went viral.

He returned to address the problem, stating that the lady’s name was Sandra and she was the daughter of her biological sister, so what the people are claiming is just a ruse to damage his reputation.

In a fresh development, Daddy Fred made a statement on Nigel Gaisie’s relationship with his niece in a new video seen on social media.

Read Also  Enough with your fake prophecies! – Vim Lady to Nigel Gyaisie and other prophets

According to him, there are over 89 images and videos of Nigel Gaisie and the lady in various postures.

He went on to remark that the position is too compromised, and he wonders if that is how uncles and nieces interact with one other.

Aside from that, he went on to say that based on the images he’s seen, the varied stances in their shots are so horrible that he doesn’t think any decent or right man of God would do that.