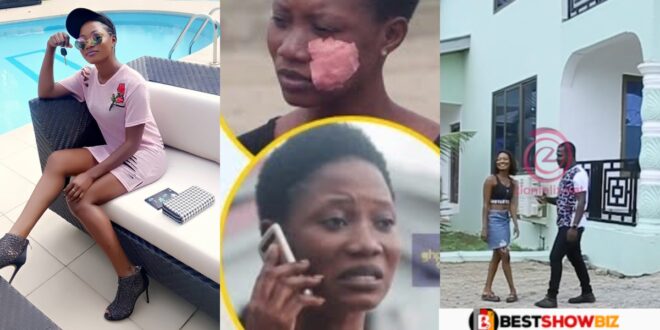 Maame Esi Forson, a 24-year-old Ghanaian actress, is on her way to becoming a billionaire.

Aside from her six-bedroom residence, the young actress has revealed that she has 25 acres of property in Accra and Takoradi, which she uses for farming.

Maame Esi Forson recently opened the doors of her six-bedroom home to the public, and she invited bloggers into her home to show them around.

In a recent interview with Delay, Maame Esi Forson, an actress, comedienne, and movie producer, discussed how she constructed her own empire and became so wealthy at such a young age of only 24 years old, among other things.

She said on the Delay Show that she runs a restaurant, which she credits with helping her accumulate all of her fortune. She mentioned that she had a manager that connected her with other firms and companies that she provided to, which she appreciated.

Delay, who was clearly taken aback by her wealth, inquired as to how much she charges for a dish, to which she responded that she charges GHC 30.

In her own words, she is the owner of ten taxis and has created a lot of films, skits, and television series to her credit.

During a recent interview, Maame Esi Forson revealed that she is far wealthier than Kumawood actor Kwadwo Nkansah Lilwin, but that the actor does not respect her because of his celebrity status.

Read Also  Shatta Wale storms out of a meeting with the IGP, expressing his displeasure. (video)

According to reports, some social media users are still perplexed as to the source of actress Maame Esi Forson’s enormous wealth. People in Ghana don’t seem to get how having a little restaurant can make you this wealthy in the first place.