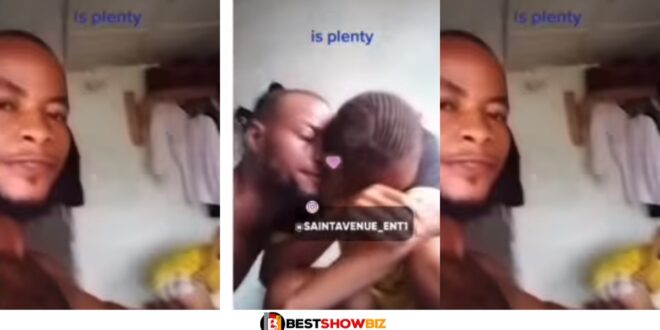 “I don’t even have a TV in my room, but my girlfriend still loves me”- Man brags

A young Nigerian man gushed over his girlfriend for choosing to stay with him despite his financial difficulties.

He posted a video of his babe cooking in his self-contained apartment and boasted about how she is building with him rather than following internet fraudsters known as Yahoo boys.

The man proudly displayed his room and stated that even though he does not have a plasma TV mounted on the wall, his girlfriend still loves him.

However, something from the pot of stew she was preparing seemed to enter her eyes as he was filming, and she struggled with the pain.

He apologized to her and proceeded to open the pot, after which he questioned other men about whether their girlfriends could cook as well as his.

Read Also  Stop Begging Me, I Will Never Step Down - Kennedy Agyapong Insist On Presidential Primaries

However, by the end of the video, she was still irritated by whatever had entered her eyes, so he had to move closer and comfort her.

lilian.a.t; Hmm. She be Bob the Builder, she dae build with you. When the money comes, no serve her breakfast sha

uniquepappy_choco; Should we tell him?

molive_organics; Just keep this same energy when you have money!!! Don’t be a saro!