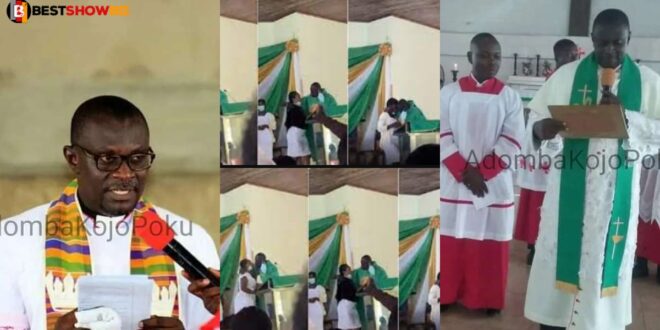 “I am sorry, i didn’t think properly before k!ssing the students”- Rev Father Apologizes

The Rev. Fr. Baltharzzar Obeng Larbi has apologized for his actions after a video of him kissing a student went viral.

He has begged forgiveness from the Anglican Church, which has already launched an investigation, the school, which has relieved him of his clerical duties, the afflicted pupils and their families, and the general public, which has roundly denounced the act.

In a statement, Rev. Obeng Larbi claimed he should have done differently “even in the absence of COVID-19.”

“I seemed to have taken a number of things for granted. I did not think my behaviour through.”

“I pray for forgiveness from all and sundry and plead that you hold me in your prayers during these trying times. May God bless us all,” he added.

The priest came under fire after a video of him kissing three females in succession during a church service surfaced online.

He took advantage of the chance to explain how the “unfortunate situation” occurred.

“This unfortunate incident happened during a Church Service in appreciation of the Level 300 students, who would be going for their Macro Teaching (Off-Campus Teaching Practice) when College resumed the next academic year, by the College’s Chaplaincy Board.

The three students seen in the video performed extraordinarily well and were therefore called to be appreciated by the Chaplain. An attempt to add a human touch resulted in the scene in the video”.

People on social media slammed the video and demanded that the Reverend preacher be sanctioned.