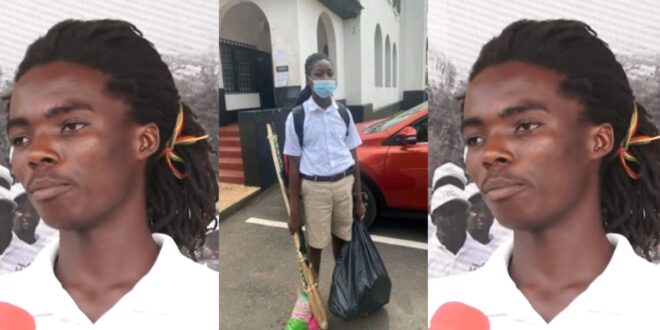 The Ghana Education Service (GES) has ordered the Achimota School to accept two first-year students with dreadlocks who arrived on campus.

This comes after news that the school had failed to admit the kids, despite the fact that they had been admitted.

According to JoyNews’ reports, school officials said that having dreadlocks is against the rules of the school.

However, a parent whose son was one of those turned down described the case as unjust.

Raswad Menkrabea, who shared the story on Facebook, clarified that his son was assigned to Achimota School through the Computerised School Placement System.

Oheneba Nkrabeah, his son, and another child, Irah Marhguy, he said, were denied access to education because of their culture and beliefs.

“One of the children impacted was my son, and the other pupil was also rejected on the same grounds. We have no choice but to fight this heinous breach of human rights. He has every right to his culture as an infant, as long as it does not violate the 1992 Constitution.

“He, like all cultural adherents, has the right to receive education within his society.

“As a Rastafarian, I agree that dreadlocks do no harm and may also be a justification for the school authorities to assert,” he wrote.

Some Ghanaians, including former Kumbugu MP Ras Muburak, have voiced strong support for the post, urging the School to reverse its decision.

“Refusing to admit them to school because of their dreadlocks is degrading punishment, which is prohibited by Article 28.” (3). The school may have its own set of rules, but they, as with all other rules and regulations, are subject to Ghana’s constitution. The constitution is the ultimate law of the land,” he posted on Facebook.

Professor Kwasi Opoku-Amankwa, the Director-General of GES, responded to the development by saying that the authorities of Achimota School cannot refuse to accept the two students.

“You can’t suggest you won’t admit anyone because of your religious beliefs,” he said. “So we’ve asked the head to let the kids go to school,” he said.

Popularly known as the webmazta; Cobby Collins is an established web designer, a computer instructor, and content creator. You can contact him via email [email protected]gmail.com or via Whatsapp only on +233204875306