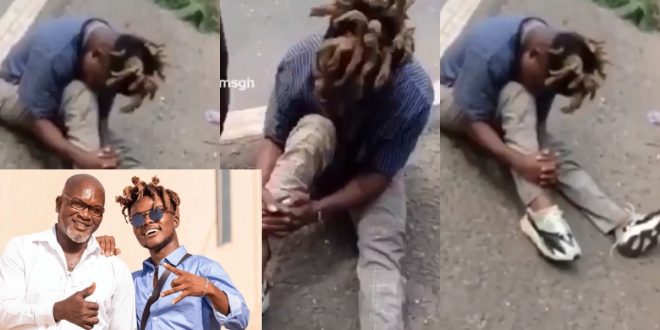 Quamina Mp, in a viral video, wept like a baby after he was told about the death of his father after their gruesome accident when they were traveling.

Bearly three days ago, Ghanaians, and more especially fans of the sensational musician got shocked after the sad news of his fatal accident went flying on social media and the Internet as a whole.

The accident, which occurred on the Akosombo Road on Thursday, November 26, 2020, had Quamina MP narrowly escaping death, but sadly got him losing his biological father and some of his crew members.

Earlier reports suggested the father reportedly suffered an injury and remained in critical condition and was rushed to the hospital but unfortunately, he could not survive.

A new video that has gone viral captures the sad moment Quamina MP learned about the death of his father – he could be seen screaming and shouting bitterly.

Passersby who were present at the scene of the accident tried their best to console him but he could not come to terms with the fact that he has lost his father.

Watch the video of the sad moment below;