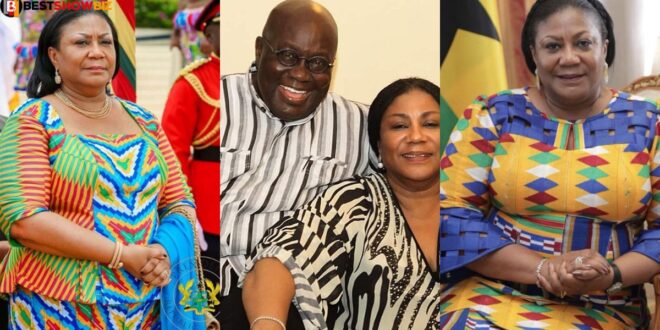 First Lady Rebecca Akuffo Addo Rejects Salary to be paid to her Government.

Following the Ntiamoa-Baidu committee’s recommendations on salaries and other benefits for Article 71 officeholders, First Lady Rebecca Akufo-Addo has declined the increased emoluments granted by Parliament for her.

This follows the backlash the administration experienced after it was revealed that the President’s and Vice President’s spouses will now be entitled to salary.

Mrs Akufo- Addo’s decision to refuse the suggested emoluments is “purely personal,” according to a statement released by the First Lady’s Office on Monday, July 12, 2021.

“The First Lady has also decided not to accept any monies that have been allocated to be paid to her pursuant to the recommendations of the Ntiamoa-Baidu committee, as approved by Parliament. She is doing this as a purely personal decision, without prejudice to the rights of others, and not to undermine the propriety of the process undertaken by Parliament.”

Mrs. Akufo-Adoo has also agreed to return to the government all of the allowances she has received since becoming First Lady in 2017. The total sum is GHS899,097.84.

Read Also  Are we safe in Ghana? Another robbery attack at Weija

She said in the statement that she did not request any payment and that “she only received that which existed and was attached to her status, albeit informally.”

The First Lady went on to say that she is upset by certain “extremely negative opinions seeking to portray her as a self-centered woman who is unconcerned about the plight of ordinary Ghanaians” in the conversations that followed the announcement of the stipend payments.

“In view of this the First Lady, in consultation with the President of the Republic has decided to refund all monies paid her as allowances from the date of the President’s assumption of office i.e from January 2017 to date, amounting to GHS899,097.84.”