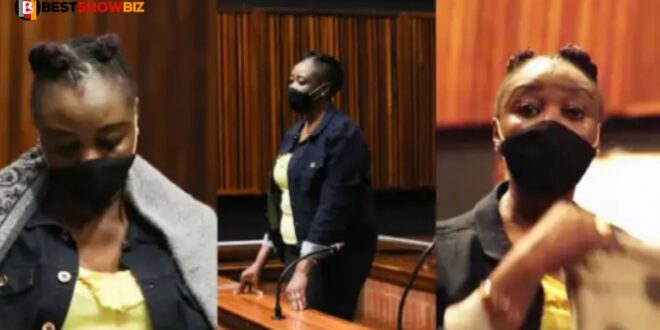 Ex-Police Woman ordered Assasin to k!ll Her Blood Sister And 5 Kids so that she could cash in on her sister’s life insurance policy (Video)

Exclusive footage of a Thembisa cop allegedly ordering hitmen to murder her sister and her five children hits online.

JOHANNESBURG, SOUTH AFRICAN REPUBLIC –A former police officer from Tembisa was caught on video directing a hitman and an undercover cop to murder her sister and her sister’s five children so that she could cash in on her sister’s life insurance policy, according to the police department.

In the Palm Ridge High Court on Monday, former police constable Nomia Rosemary Ndlovu, who is being investigated as a possible serial killer in connection with the deaths of numerous other family members, will be put on trial for the first time to hear arguments in her defense.

In anticipation of the start of the trial of former police constable Nomia Rosemary Ndlovu on Monday, TimesLIVE brings you exclusive footage, which was presented in court. The video was allegedly captured by an undercover police officer who had hidden the recording device in a car that he, Ndlovu, and another recruited “hitman” were traveling in.

The three of them were on their way to Bushbuckridge, where Ndlovu was going to show them around her sister’s home. Her sister, Joyce, and her five children were allegedly set on fire in the house by the two guys who were hired to do it.

In her own words, Ndlovu stated that they should “leave no witnesses in their tracks.”

Ndlovu said in the video how she had checked herself into a hospital to provide an alibi and then obtained a day pass to depart the premises earlier in the day.

They stopped at a garage in Middelburg, Mpumalanga, on their way to Bushbuckridge, where she purchased two litres of petrol and gave it over to the undercover cop. The petrol was intended to be used to spark the flames that would extinguish the lives of six members of her family. The state’s case against her has relied heavily on the testimony of ch.

Additionally, it was during this tape, which was captured during their five-hour trip from Johannesburg to Bushbuckridge, that she allegedly stated a reason for wanting her sister dead.

Ndlovu was unfazed and unconcerned about the fact that her sister’s children would also perish in the conflagration.

When the undercover detectives inquired as to whether the plans she had purchased included coverage for her children, she responded, “It will not pay out for the children, only for [the mother].” However, they cannot be left behind because they will be present as well. You are well aware that sparing them will result in the loss of witnesses. As a result, when a house burns down, everyone in it burns.”

She was reported to have hoped that the fire would be judged an accident and that she would be able to collect a big quantity of money from the insurance policies she had purchased.

Ms. Ndlovu was apprehended just moments after she had pointed out her sister’s house to the “hitmen” and took a cab back to Johannesburg, from where she was racing to the Carstenhof Hospital in Midrand to establish her alibi.