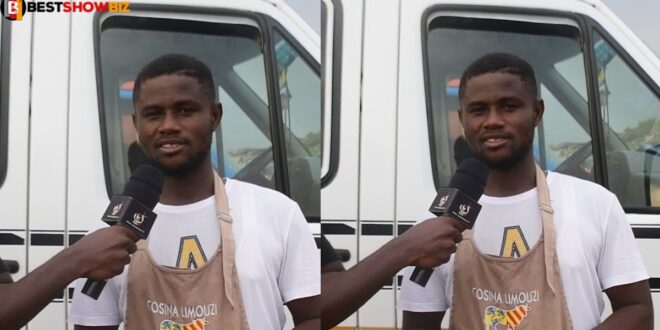 The social preconceptions that males encounter in female-dominated sectors haven’t stopped Ebenezer Tetteh from starting his ice cream business. Tetteh grew up in Tema Community 2 in the Greater Accra Region, mostly with his mother, and recalls financial struggles in school.

Tetteh proceeded to New Juaben Senior High in Koforidua, in the Eastern Region, but failed to get the best grades to continue his study.

Despite the financial and intellectual setbacks, he refused to give up.

The determined young man intended to better his grades and find work to support himself. Tetteh had to sell ice cream to pay his fees due to rising youth unemployment.

He said a young woman selling ice cream at BBC in Tema Community 2 motivated him to start the business.

”One day I went to BBC at Tema Community 2 to watch a football tournament that was then going on and I saw a woman selling this ice cream. I said to myself, I’m well-known in this area so why don’t I start something like this and see if it will work”

Despite his efforts, Tetteh says that it hasn’t been an easy walk in the park because he has received negative feedback regarding the ice cream’s variable flavor.

”I take their complaints and work on them.”

In addition to the complaints, he claims that he receives unfavorable remarks from some guys, who frequently assert that selling ice cream is a female-only activity. Tetteh intends to return to school in order to further his education at a tertiary level with the money he earns from his ice cream enterprise. Take a look at the video below to see the whole interview: