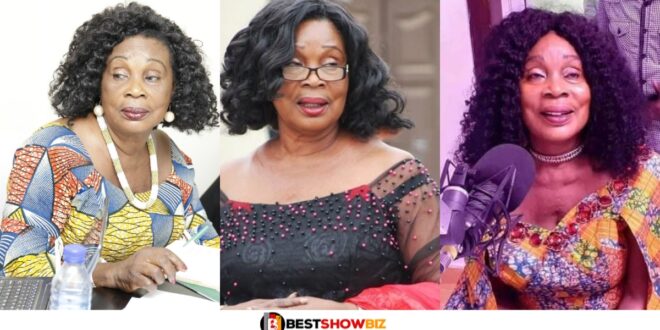 ‘Don’t leave a good man because he cheated, Good men are hard to find’- Maame Dokono

Grace Omaboe, an actress, singer, and television personality from Ghana who is also known by her stage name Maame Dokono, recently issued a warning to young women, advising them to exercise caution in their interactions with males.

She cautioned them to treat excellent men with great care, saying that it’s like cracking an egg: it’s extremely difficult to get a good one back after you’ve messed with him.

“Have patience, and marry a man who will appreciate you for who you are. You’ve found a man who loves you. Someone who won’t try to trick you with his good looks and bank account.

“Communicate with him so that you can understand each other. Don’t be too proud. Time changes. Be humble and find a good man. Good men are scarce, so when you find one, cherish him like an egg,” the revered filmmaker said.

Maame Dokono has stated that she regrets her decision to divorce her first husband now that she has more life experience thanks to her other marriages.

“I have been married twice, but I suffered very much during the last one. I always say that if I knew how my second marriage would have turned out, I would have stayed with my first husband,” Maame Dokono told Delay.

“I always say that if I knew the intricacies of marriage that I know now, I wouldn’t have left him,” referring to her first husband.

“After leaving these two marriages, I want to devote my life to helping underprivileged women and children,” she added.