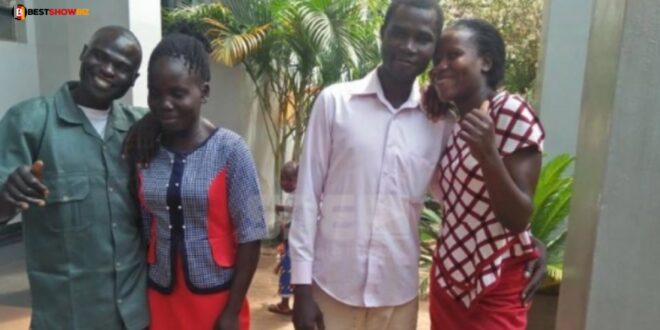 After facts of infidelity were disclosed, two men are said to have mutually agreed to swap wives as a way of settling their disputes.

After Sakis and Odour’s wife decided to make their secret affair public, Josh Odour and Sakis from Busia County in western Kenya switched wives and children.

Odour first learned that his wife was having an affair with Sakis, according to KDRTV, but he did not believe it.

However, he was taken aback when he discovered his wife washing the dishes at Sakis’ house.

The wife then informed him that she had parted ways with the Boda Boda driver.

In retribution, Oduor is accused of luring Sakis’ wife, who had returned to her parents’ house, and convincing her to marry him.

The lady agreed, and the two even went to the police station to report their new relationship.

Odour claims he is keen to impregnate his new wife as a supplement to the two children she already has. He went on to say that he will do it because he is used to having three kids in the house.

Odour, on the other hand, remarked that if he wanted a child from his new wife, he would have to wait a little longer because she was on a long family planning strategy.

In Kenya, the practice of swapping wives is becoming more popular.

In August of this year, two Kenyan ladies swapped spouses and agreed to live in their new marriages with their biological children.