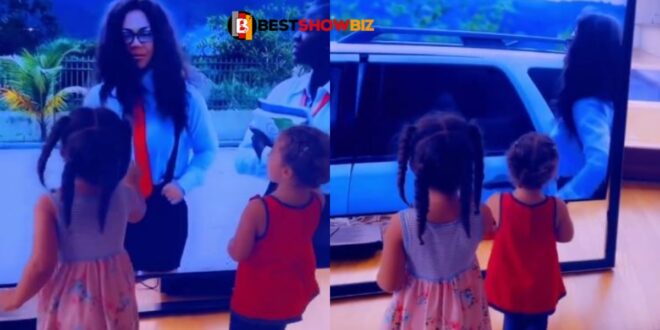 A touching video of Ghanaian actress Nadia Buari with her children has gone viral.

The mother of two sets of twins is overjoyed by the love and support she receives from her children.

Nadia Buari’s lovely children can not get enough of their famous mother, and they lavish her with love-perhaps too much affection.

Nadia Buari, an actress, has released a video in which her children are seen leaping around and attempting to touch her on television.

Nadia Buari was reportedly showing them a film in which she had acted. When her children saw her on set, they could not contain their delight and attempted to embrace their mother on the screen.

The most intriguing aspect is that the twins exclusively looked out for and caressed their mother. Except for their gorgeous mother, Nadia Buari, they did not give a damn about anyone else on site.